Here's a summary of the possible fields:

Graphing the dhost, cat and outcome values as a metric within CloudWatch is a great way to monitor the baseline of your network egress and the health of the firewall instances.

And if a Security Group with a see-thru rule in it is found attached to the client application, the following fields will be also present:

Config reference for the see-thru rules can be found here.

Config Logs can be found in CloudWatch under the DiscrimiNAT log group, in the config log stream. They form an audit trail of changes made to rules and Security Group attachments as clients come and go.

Here's a summary of the possible fields:

cat: fqdn, client or see-thru change category
outcome: accepted something new , or removed it
client: IP address of an affected client
gid: the Security Group ID that relates to this change
fqdn: the FQDN found in a Security Group rule
proto: tls or ssh protocol as identified in the rule
instance: the EC2 instance ID of the DiscrimiNAT instance this log line was generated from

And if a Security Group with a see-thru rule in it is found attached to a client application, the following fields will be also present:

thru_date: the date until which the non-blocking see-thru mode should remain effective; past this date such a rule would lose effect

The log lines are JSON-structured so each field can be addressed specifically. More of CloudWatch syntax can be explored on its Filter and pattern syntax page.

allowed but protocol is not TLS​

connections from a specific client where the destination host is not api.github.com​

connections where the see-thru mode had to be used, but not for perhaps telemetry data​

building an allowlist from scratch​ 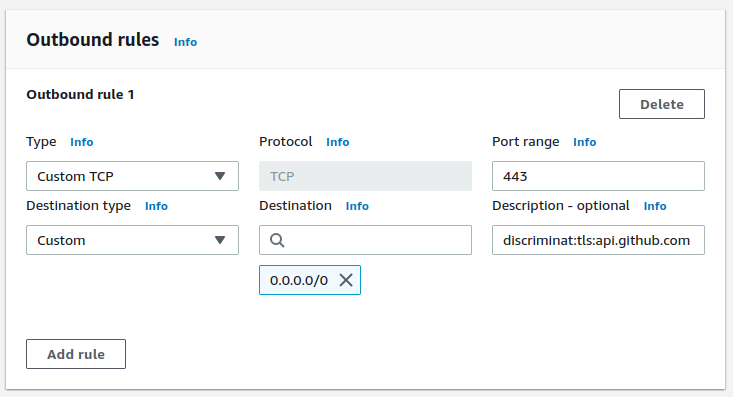 Full reference for creating these protocol rules is here.