Story of pipeline nobody would like to see develop a leak.

It runs in a self-hosted GitHub Actions Runner, spun up on AWS spot instances by philips-labs' terraform-aws-github-runner, connecting to Snowflake – with 'secrets' stored in GitHub itself.

🏗 we build the normal list of FQDNs such a pipeline accesses when run
🔒 enforce it via the discrimiNAT firewall
🔇 introduce an unobtrusive curl command, like in the Codecov Uploader breach
🚫 see it fail in exfiltrating any data from the CI environment
🔎 detect the attempt in flow logs

A VPC with a Private Subnet, access to the Internet from which is via a NAT Gateway. Only in this case, the NAT Gateway is the discrimiNAT firewall that supports egress filtering by FQDNs.

For the various topologies and ways to deploy the discrimiNAT on AWS, see its AWS docs.

While this demonstration builds upon the philips-labs' terraform-aws-github-runner Terraform module, the principles apply to any workload in an AWS VPC. From serverless Lambda functions in the VPC to EC2 instances.

In the philips-labs' terraform-aws-github-runner Terraform module, the following variables would need to be overriden from their defaults to deploy the resources in a VPC, attached to egress-filtered Security Groups:

Contact our DevSecOps Support for queries at any stage of your journey. Alternatively, reach out in the live chat.

The two Security Groups alluded to above, sg-fooLambda and sg-fooRunner, should be deployed without any rules and referenced in the variables highlighted above. The rules to be added will be discussed during the course of this exercise.

The workflow is adapted from Snowflake's DevOps: Database Change Management with schemachange and GitHub quickstart – the objective of which is to build a simple CI/CD pipeline for Snowflake with GitHub Actions.

There are two notable changes in the Action YAML from that quickstart:

Since the see-thru rule type needs a date until which it should work, we supply the current date itself since we expect to have captured all the destination FQDNs with a single run of the pipeline.

The discrimiNAT firewall is configured through annotations in the description fields of the Security Group Rules. The rules are then applied to the workloads attached to those Security Groups.

For reference, both the Security Groups, i.e. sg-fooLambda and sg-fooRunner, should have an outbound rule with the following parameters:

For a complete reference on the see-thru rule type including Terraform snippets, see AWS config reference.

With these Security Groups configured, we trigger the pipeline. A few minutes later, the Action has succeeded at GitHub with a ✅. Time to build the FQDNs list from the flow logs.

In CloudWatch Log Insights, with the discrimiNAT log group and a narrow time range selected, we enter the following query to determine which destinations the Lambda functions reached out to:

We get the results:

Repeating the exercise with the Runners' Security Group:

As expected, we get a different set of results:

For a complete reference on the tls rule type including Terraform snippets, see AWS config reference.

⚠ And we delete the see-thru rule that was put in place.

The Security Group sg-fooRunner is a bit more comprehensive:

For a complete reference on the tls rule type including Terraform snippets, see AWS config reference.

A few notes on the assortment of destinatons above:

⚠ And we delete the see-thru rule that was put in place.

With the Security Groups now hardened, we trigger the pipeline again. A few minutes later, the Action has succeeded again at GitHub with a ✅ confirming that the now-configured egress access is adequate.

We insert a curl command to exfiltrate the secrets. It is inspired by the Codecov breach, only that we've evolved it to adapt to HTTPS and spoof its way around SNI firewalls.

Although in Codecov's case the command was inserted in the Docker image, we've laid it out in the clear here for demonstration. From an execution point-of-view, whether a command is run from within a container, on the shell or a network connection is made from a line of code in an application, it's all the same to a firewall sitting in the network path to the Internet.

Pipeline still runs successfully to completion ✅. Since we deliberately did not suppress the output from the curl command, we notice the following in the pipeline's output:

Filtering the discrimiNAT flow log with a filter such as {$.outcome = "disallowed" && $.proto = "tls"} yields the attempted connection! 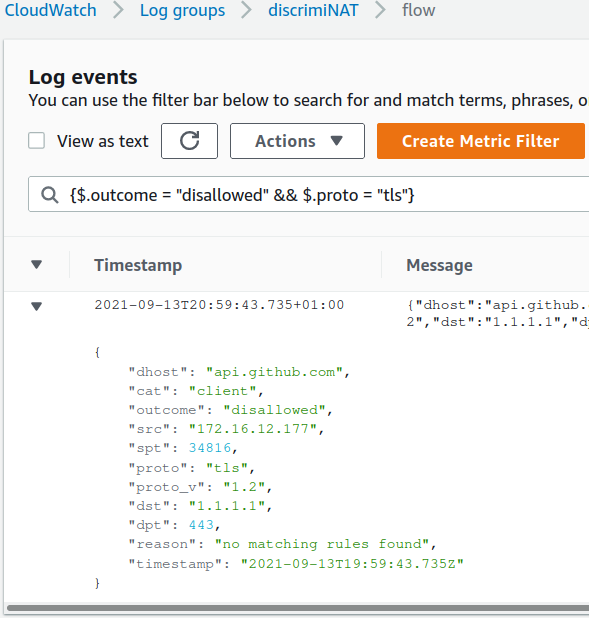 From this point, should you choose to, these results could be turned into a metric and alarms built off it following the official guide on Using Amazon CloudWatch alarms.

🚀 Launch a free trial now from the AWS Marketplace

🚀 Get in touch with our stellar DevSecOps who will: